The Past, Present, and Future of Medical Bandages

Home » The Past, Present, and Future of Medical Bandages

Humans have been injuring themselves and each other for centuries. As a result, the need to stop bleeding and deter infection has led to countless innovations in wound care throughout history. Of course, we aren’t finished yet—advanced medical film coatings and new technologies will continue to improve how wounds are treated moving into the future.

Here is a look at how medical bandages have developed over time, and how they may change in the coming decades.

Wound Care in the Ancient World 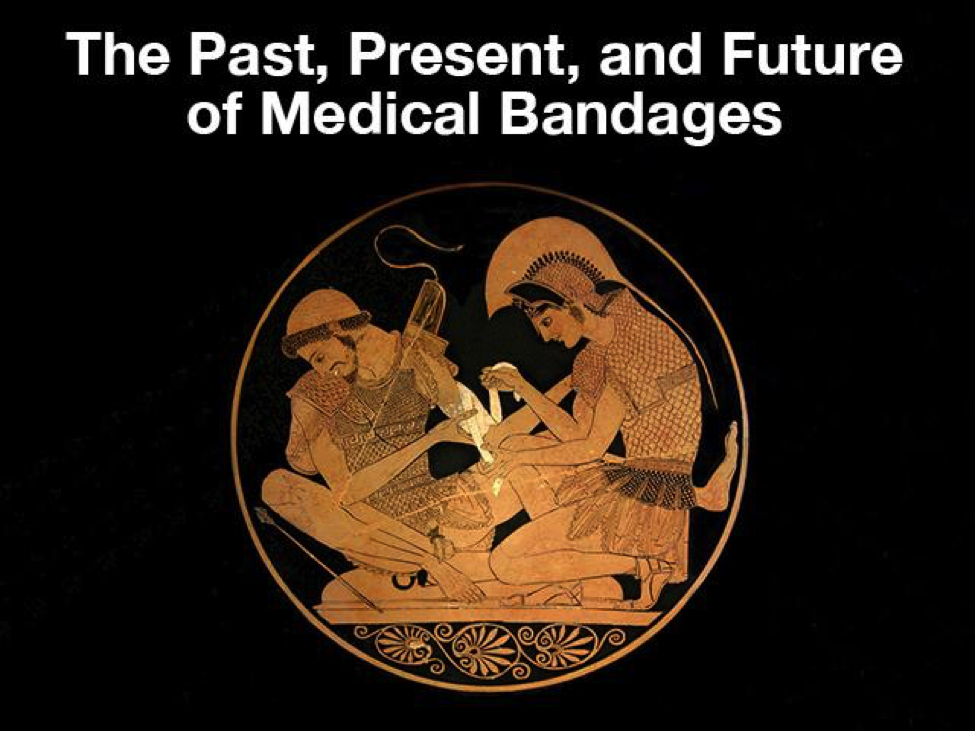 The ingenuity of many ancient cultures still impresses us today. The ancient Egyptians were particularly innovative, whose architectural, artistic, economic, and agricultural technologies were far ahead of their time.

Ancient Egyptians also worked tirelessly to understand human health and anatomy, and to develop the very best medical treatments and practices. Advanced surgeons, the ancient Egyptians knew that blood was a vital substance in the human body and created several innovative ways to stop open wounds from bleeding and becoming infected.

One method, which is still sometimes in use today, was to use honey as both a bandage adhesive and a way to naturally kill bacteria. Another was to apply bits of moldy bread to a wound as a kind of early antibiotic and dressing for the wound.

Bandages in the Modern Era

Improvements in sanitation and medical technology over the centuries led to many of the wound care practices and products we know today. These look entirely different than those used in ancient times.

The ubiquitous Band-Aid was developed at the beginning of the twentieth century. Johnson & Johnson employee Earle Dickson came up with a way to produce flat strips of cotton and attach them to tape for an easy, quick bandage his wife could use. All Johnson & Johnson had to do was begin to mass-produce them and spread the word.

The Future of Wound Care

Medical film coatings are improving all the time, and new ways of fusing wound care and technology with an eye toward sustainability are changing the bandage landscape.

Advancements in medical films such as breathable adhesive, bacterial barrier, low coefficient of friction and low trauma have been optimized over the years to offer high-performance medical components for bandages. Breakthroughs that have taken place in wound dressing design include the use of breathable polyurethane films as the outer layer. The breathability of these films allows moisture from the wound, at a molecular level, to pass through the film and prevent the white, wrinkly finger situation we are all familiar with when using traditional bandages. The consequences of the breathability include extended “wear time” which reduces the number of dressings required to heal a wound, but this extended wear time also improves the clinical outcome as frequent dressing changes can damage the wound site and slow the healing process.

Although many polyurethanes are breathable, they can be designed to retain their waterproofness to allow patients to wash and bathe. If these polyurethane films are created under exacting conditions, they can also create a barrier to bacteria. With over 30 years of experience of producing polyurethane films for the medical marketplace, Transcontinental Advanced Coatings can guarantee bacterial barrier performance for many of its products. Transcontinental films are also designed to have a very low coefficient of friction which reduces the potential for a dressing to roll off due to the friction between the dressing and either clothing or bed sheets.

Although many advances in adhesives have taken place, there is still no perfect product. Developers globally are looking for an adhesive that will reliably stay in place for up to seven days and then be removable with the minimum amount of pain and trauma to the patient. Many different technologies have been tried, including switchable light systems, but even these have not gained universal acceptance.

While there are no perfect adhesive enhancements, developments in chemistry have created breathable adhesives. In addition to the chemistry changes, it is also possible to coat adhesive in a grid or similar pattern that engineers holes into the adhesive layer which in turn generates breathability. The beauty of this solution, which has been adopted by Transcontinental Advanced Coatings, is the choice of adhesive that is significantly making it possible to create adhesives with the right balance between breathability and sticking power.

Other advances in adhesives include silicone gels. These materials are preferred for their very low pain on removal. While these materials are used widely, for this reason, they are expensive and tend not to be breathable. This leads to increased processing costs as the silicone layer tends to require perforating. They are, however, a fast-growing sector in the market.

Reducing the risk of infection, particularly in hospital environments, is a major topic of research and most major wound dressing manufacturers have products that incorporate additives to minimize this risk. Historically honey has been used for its healing benefits, and even today honey dressings are produced. Other antimicrobials that are used include CHG, PHMB, many silver derivatives that are also commonly used. These materials tend to be incorporated into the wound contact layer rather than the film or adhesive. However, Transcontinental does have the capability to include antimicrobials in these materials if customers require.

The Role of Combined Hydrophilic Foam and Film

Another exciting new technology includes flexible bioelectronics. While performing all the traditional functions of wound protection and medicine delivery, these bandages will also be able to monitor vital signs throughout the healing process, including oxygen levels and body temperature.

Transcontinental Advanced Coatings is a global leader in coated products, including our inspire® Medical Film Coatings for moist wound dressings for the professional and consumer market. We welcome questions about any of our products or capabilities; just fill out our online form to get in contact today.